Posted by Andi Murphy on 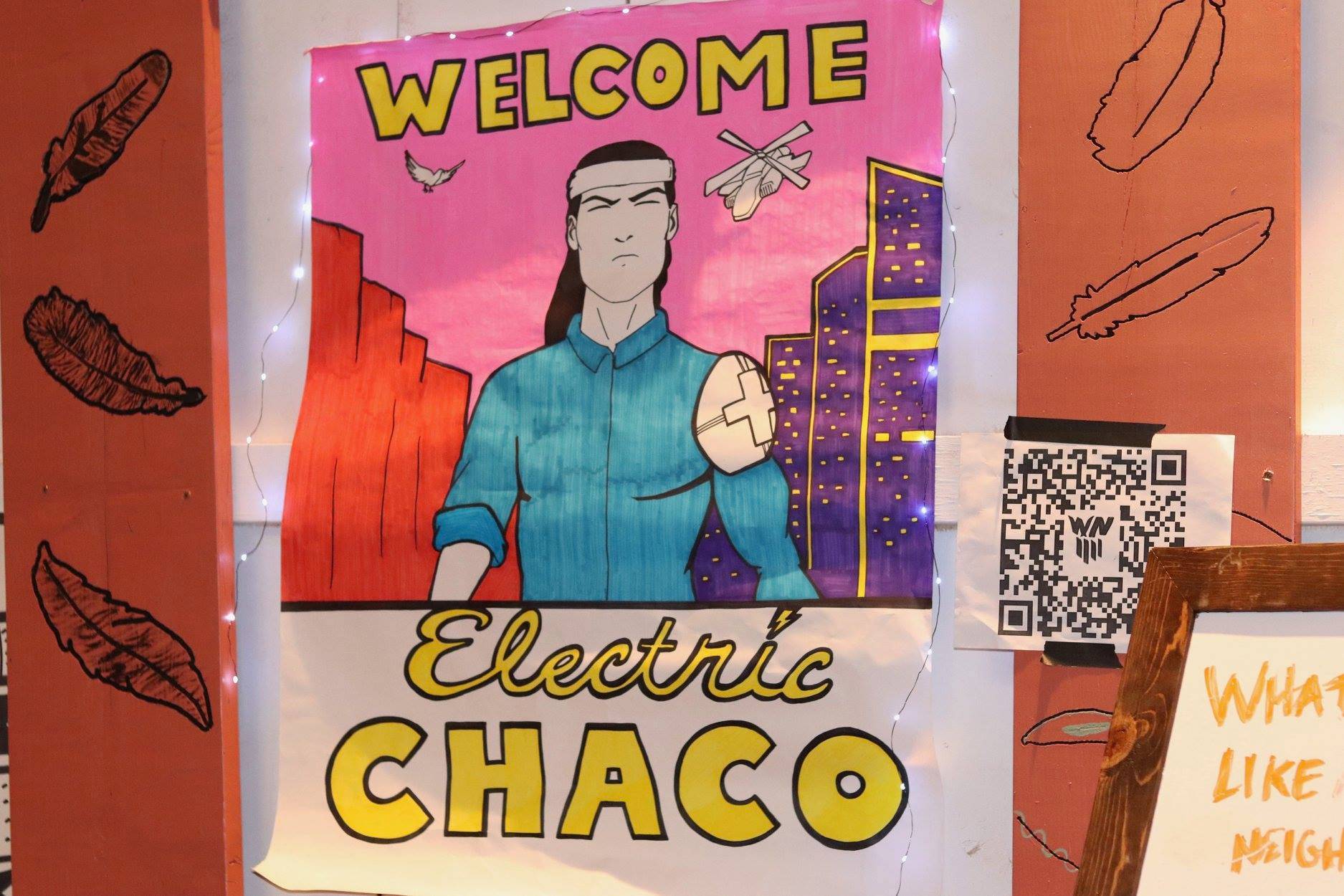 Welcome to Electric Chaco, a futuristic world where Indigenous people develop cities and communities that are completely sustainable and yet still adhere to Indigenous culture and traditional knowledge. Imagine bright and heavily textured walls jutting out from a desert landscape of mesas. This is one of few cities to exist on a now-barren planet. Its survival can be attributed to the resilience and traditional knowledge of Indigenous people — we have always had the wisdom and ability to face monumental challenges and survive the apocalypse. 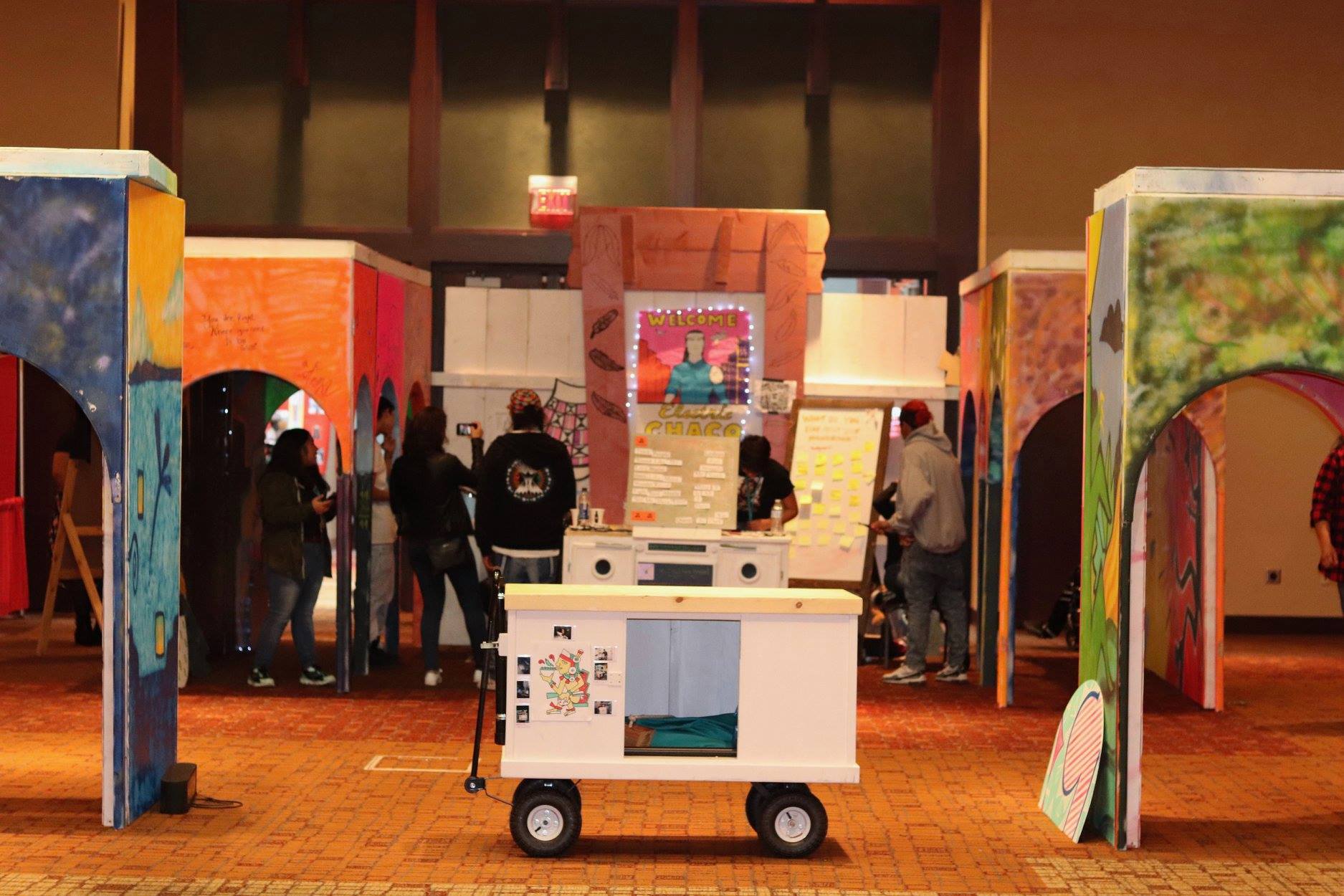 I’m standing in front of the Grand Tower of Electric Chaco, a physical manifestation of an imagined world and a homage to the ancient city of Chaco Canyon in New Mexico. In its heyday, 900 years ago, the city at Chaco Canyon was bustling with Pueblo life. It stood out in the desert, defiant, like Electric Chaco does in fiction.

It’s a maze of 10-foot high colorful walls scribbled with permanent marker; welcome graffiti from attendees of the very real Indigenous Comic Con, the first and only comic convention showcasing Indigenous pop culture and comic books. The third annual event took place in November in Albuquerque and featured dozens of special guests including actors like Eugene Braverock, best known for his role as “Chief” in 2017’s Wonder Woman movie; comic book creators like Arigon Starr, who developed the character “Super Indian”; and artists like Weshoyot Alvitre who contribute their extraordinary illustration work to long-standing indie publishers such as Dark Horse and IDW. Like most comic conventions, cosplayers came dressed as characters from pop culture. Darth Vader was there and so was Sailor Moon and Mexican pop star Selena. But cosplayers at Indigenous Comic Con also dressed as Native characters, like the small girl who came as the “Slayer girl” from artist Dale Deforest’s illustration featuring a tattooed Navajo woman weaving while wearing a Slayer T-shirt. Indigenous Comic Con upped the ante with their programming this year, hosting a fashion show by designer Loren Aragon, live wrestling starring WWE legend Tatanka, and a chef demo featuring delicious work from Navajo chef, Brian Yazzie. 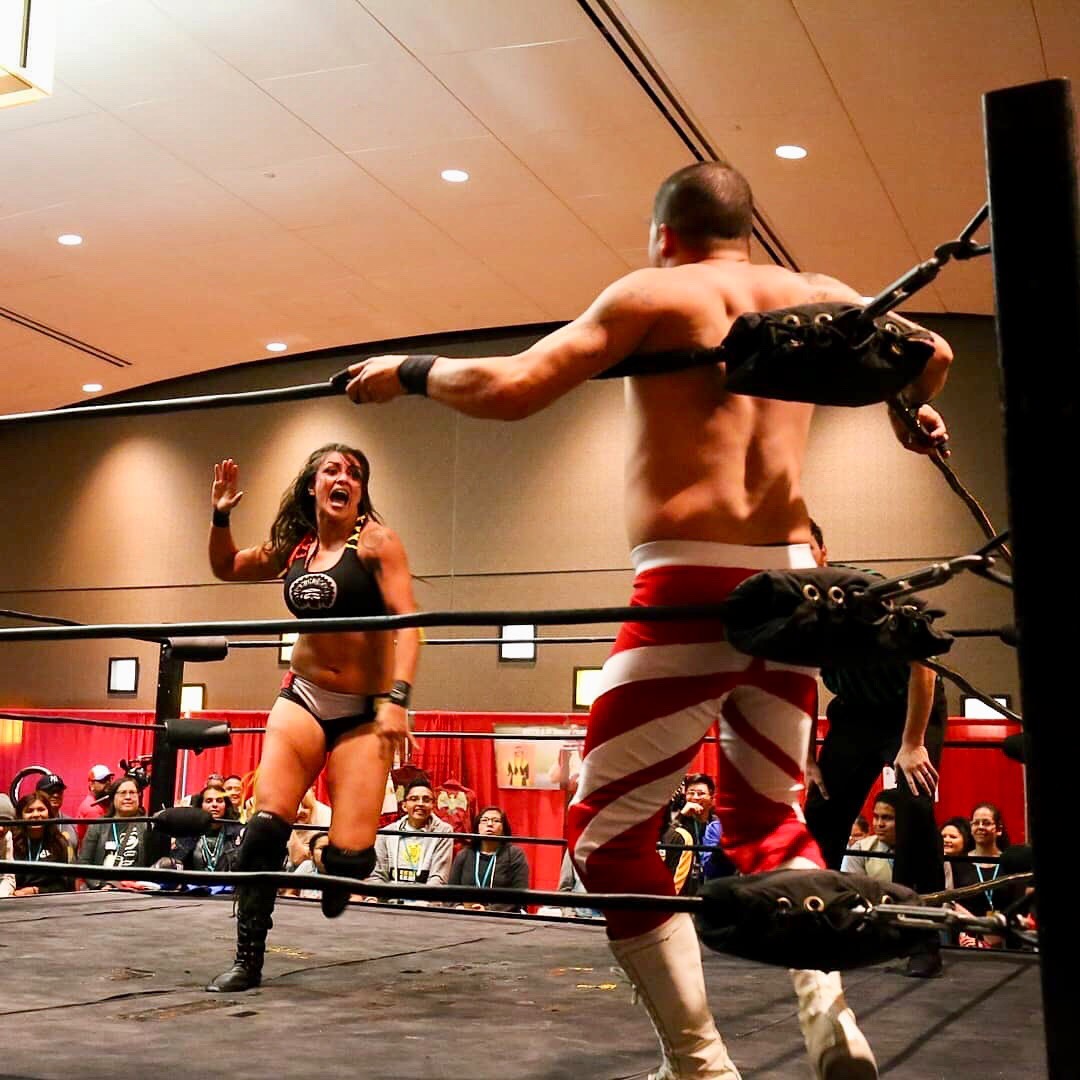 The halls were full of people milling around booths, having conversations, networking, and celebrating this very unique convergence of Indigenous creativity. In addition to tables loaded down with books and art, all three days of the convention were filled with panel sessions, film screenings, and art exhibits that evoked the concept of Indigenous futurism. This term was originally coined by Dr. Grace Dillon, author of Walking The Cloud: An Indigenous Science Fiction Anthology, to describe alternate realities in pop culture viewed through an Indigenous lens. 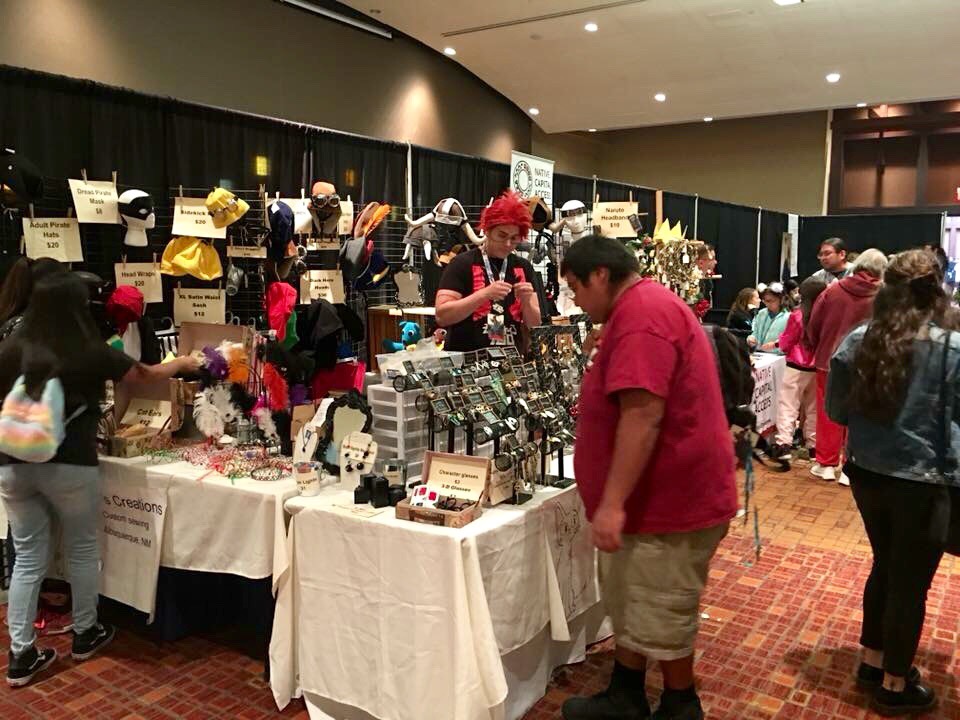 Walking through the convention hall, I witnessed a variety of interpretations of what these imagined futures could be, but the element they each share is that Indigenous characters take center stage. Navajo artist Shaun Beyale grew up without running water or electricity and so comic books became his main source of entertainment and the inspiration for his artwork today.  Delve into his work and you’ll be introduced to Navajo women with extraordinary powers, ones who can fly and control the elements, women who use their gifts to save people from monsters. Illustrator Jeffrey Veregge approaches popular mainstream characters like Batman and C3PO and reimagines them with Indigenous Pacific Northwest symbolism and influences. The most striking aspect of experiencing the numerous tables was realizing that every Native illustrator, writer, and artist there was in charge of their own story.

“I think this is very exciting,” Dr. Dillon tells me. “First of all, we’re there in the future and we’re thriving.” 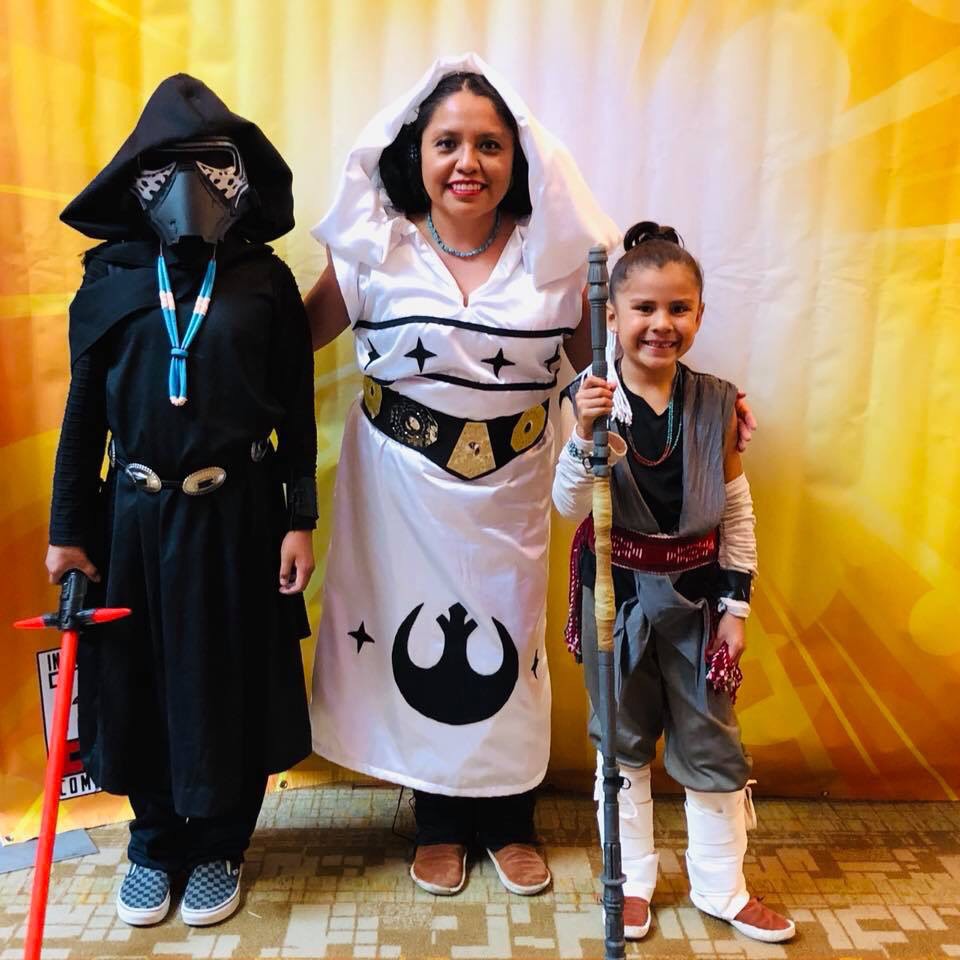 Her quote is simple but it sums up the concept of Indigenous futurism. It’s our perspective of the future and where we want to see ourselves in it. We could develop superpowers and fight otherworldly villains, we could be farmers in Electric Chaco, or we could be gun-slinging space cowboys on a mission to find the perfect fry bread recipe.

Indigenous futurism relies heavily on our understanding of the world and our relationship with everything around us. It not only takes into account Indigenous science, but our culture and religion, which are inherently intertwined. This is what makes Indigenous futurism, and futurisms from other people of color, different than non-Native futurisms and science fiction, which seem to be detached from spirituality and culture. Imagining Native life in the future means imagining how our efforts to preserve sovereignty and culture today have shaped our future success. It’s imagining how monumental moments and events like Standing Rock and Native women taking office become precursors to the empowerment of Native people in the future.

The official Indigenous Comic Con program guide includes the backstory of Electric Chaco and the Indigenous people who live there. According to that backstory, Indigenous people are the architects of their own destiny. Electric Chaco and 2395 doesn’t include a colonial government or invaders. It’s a world I think many Native people dream about as we struggle with real issues like sovereignty, racism, identity, climate change and poor health. 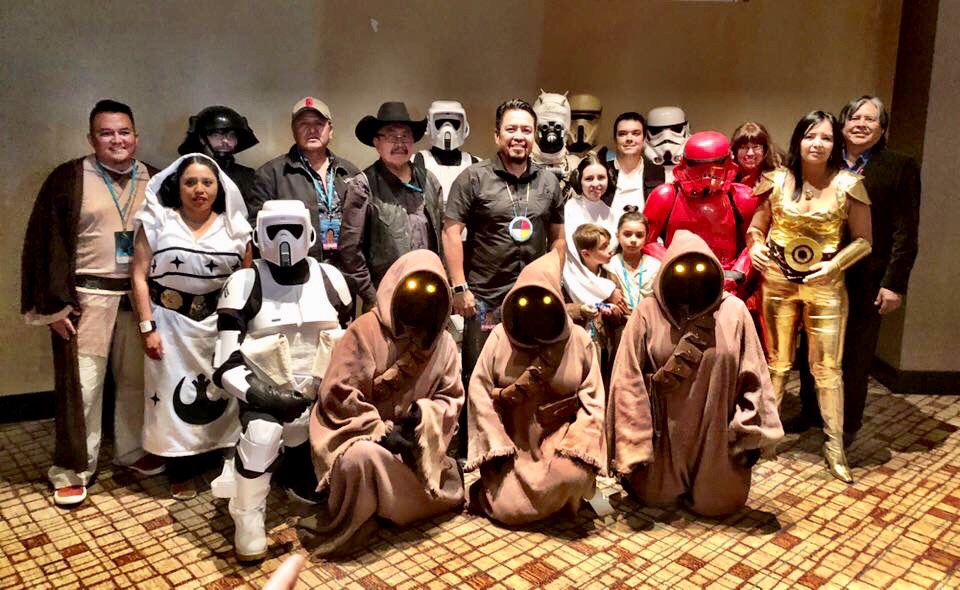 The Indigenous Comic Con has shown us that the future is bright (though it would be boring without challenges. There would be no need for heroes!). With Indigenous futurism, we are also setting goals; to create Native heroes and to tell our stories while also reconnecting with tradition and honoring our cultural identity. So, while spaceships and time travel may merely seem like escapist entertainment, thinking that far ahead into the future offers a Native dreamer a sense of hope. 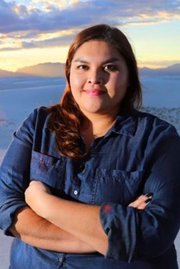 Andi Murphy is a journalist and producer for the Native America Calling radio program, a national call-in show focused on Indigenous topics and issues. She is also podcaster who produces and hosts the Toasted Sister Podcast, a bi-monthly show about Indigenous food.

Murphy comes from a newsprint and photo background and has always found a way to focus on food in her writing and photography over the last 7 years. She lives in Albuquerque, New Mexico, and grew up on the Navajo Nation. She is Navajo.