Last Updated by Tashia Hart on 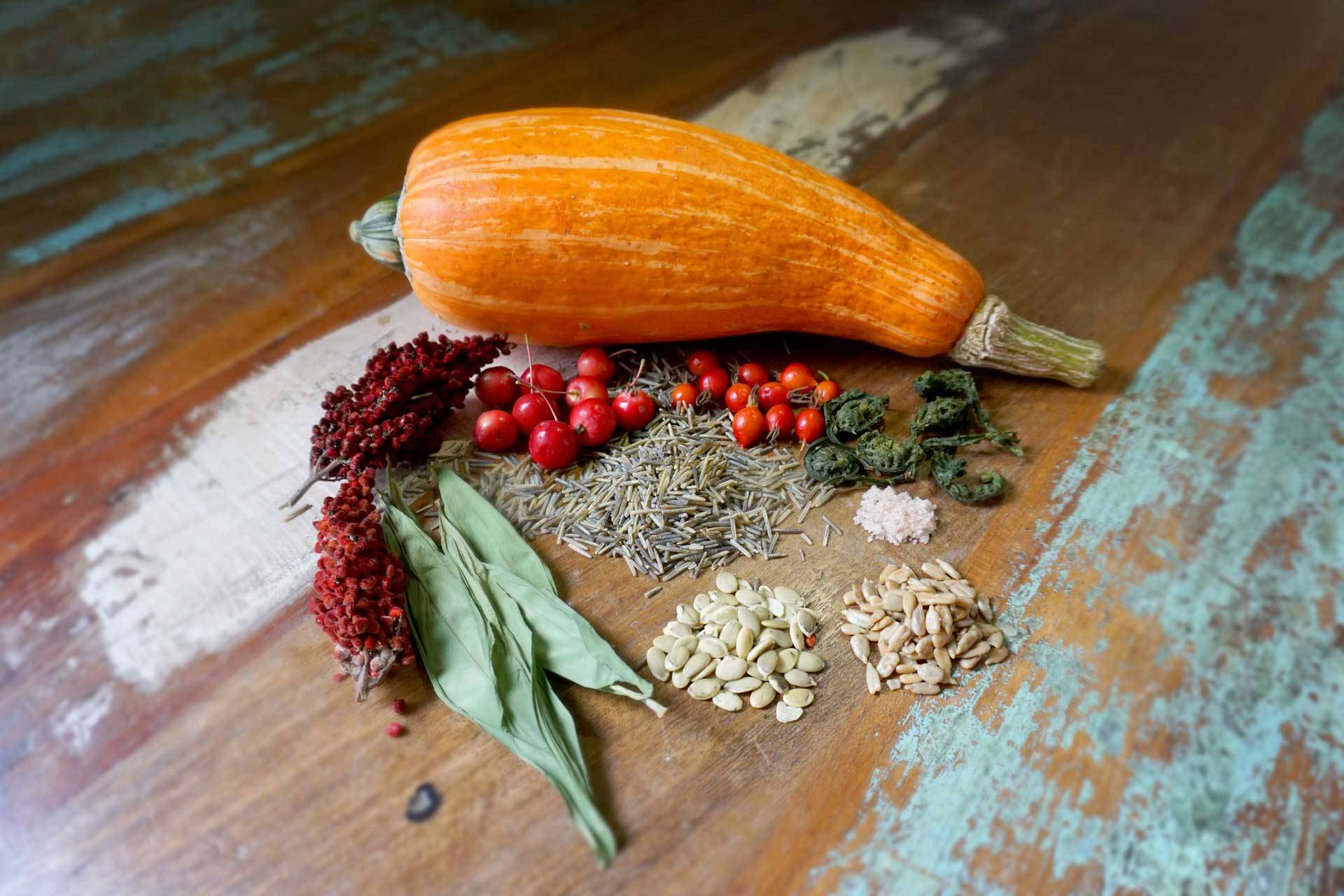 Editor’s Note: The opinions expressed in this blog post are solely those of the author.

Last October I was invited to Oahu to cook a 5-course, multi-cultural dinner with chef Ed Kenney, host of PBS show Family Ingredients. Each course turned out to be a surprising and delicious melding of local flavors from Kenney’s region as well as mine (Northern Minnesota). 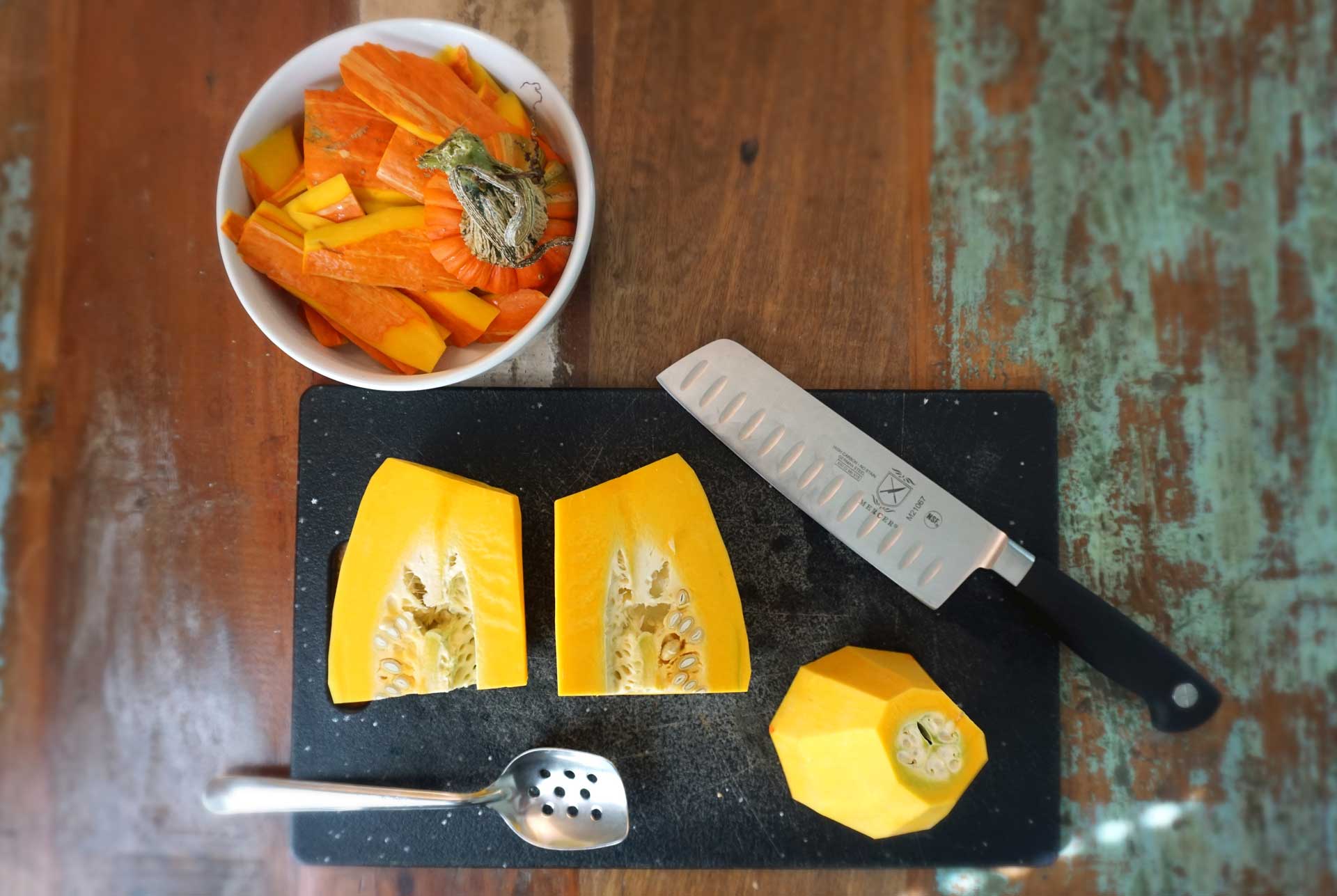 One of those courses featured a squash pie with a seed crust by me, topped with a salad of ho’i’o (Hawaiian Fern), fresh bamboo shoots, Maui onion and Kukui Nut tossed with citrus and macnut oil by Chef Ed. Now, I cook a lot of food, but that pie was so good it’s been on my mind for nearly a year.

As we enter into the season once again of beautiful squashes, I decided it was finally time to attempt to recreate the balance of flavors the original squash pie dish had but this time utilize all wild and locally sourced ingredients and flavors. The original pie was savory perfection with a touch of sweet, a nice crumbly crust and a fresh citrus and rich nutty crunch…a tough challenge! 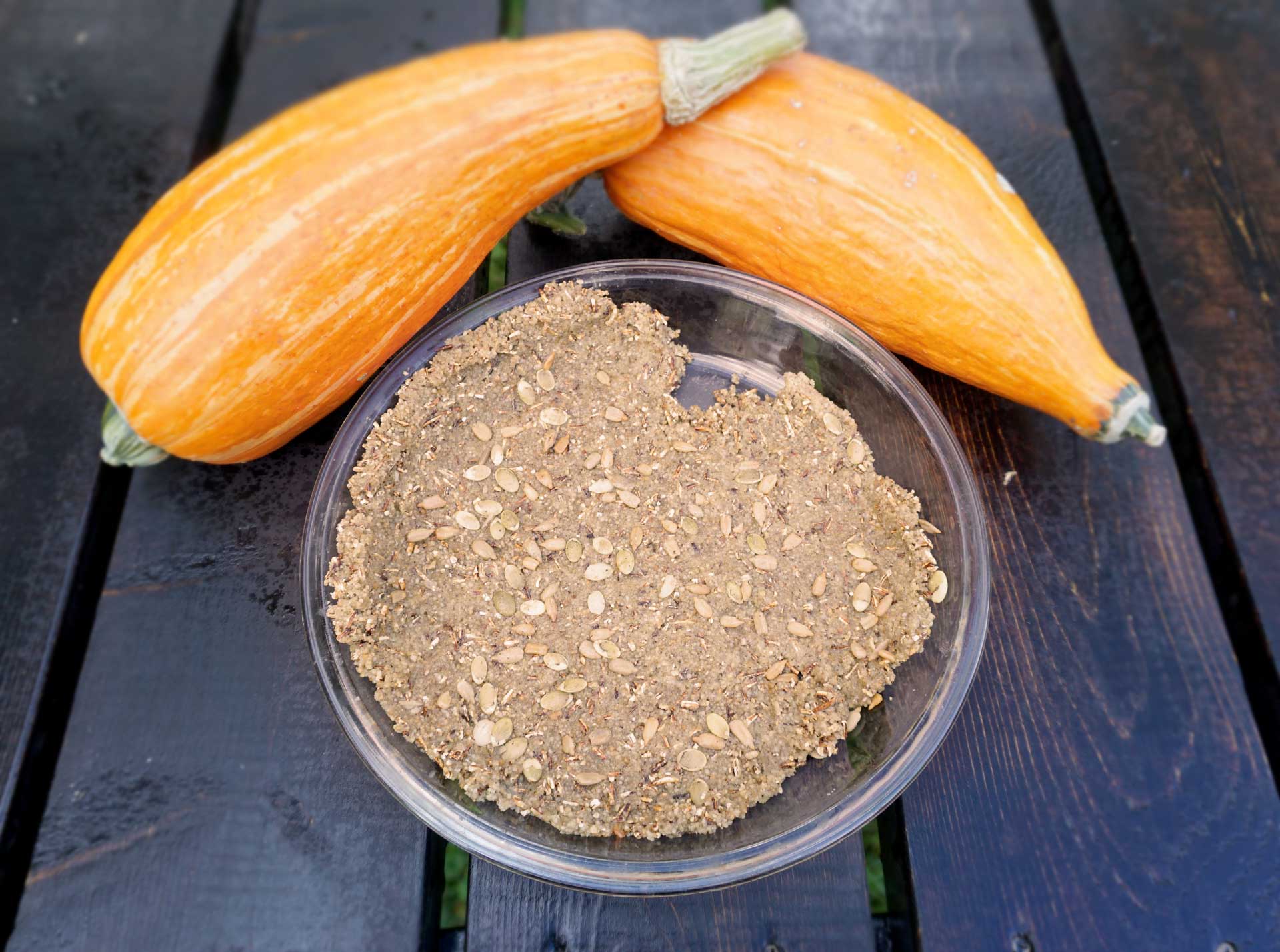 This hand-pressed crust is full of crunchy, seedy goodness that has a delightful aroma as it browns in the oven.Photo by Jonathan Thunder

If you’re wondering what flavors are local to Minnesota, you’re not alone. The historical and systematic oppression of Indigenous cultures that has taken place in our country means that the foods at the center of our cultures have in some places become shadowy areas of completely lost knowledge in our modern lives. Our foods have a lot to offer and as inhabitants of Turtle Island (North America), it is up to all of us to engage in the responsibilities needed to acknowledge and take care of them.

The Gete-Okosimaan (Ancient Squash) in this recipe came from the hands of youth working in the Babaamaadiziwin Gitigaan (Journey Garden) out of Nahgahchiwanong (Fond du Lac Band of Lake Superior Chippewa) Reservation, about a half hour drive from where I live in Duluth, MN. This squash has a vibrant, orange flesh and is great when simply tossed with a little oil and baked in the oven, as it releases it’s own juicy nectar and then bakes in it to caramelized deliciousness. 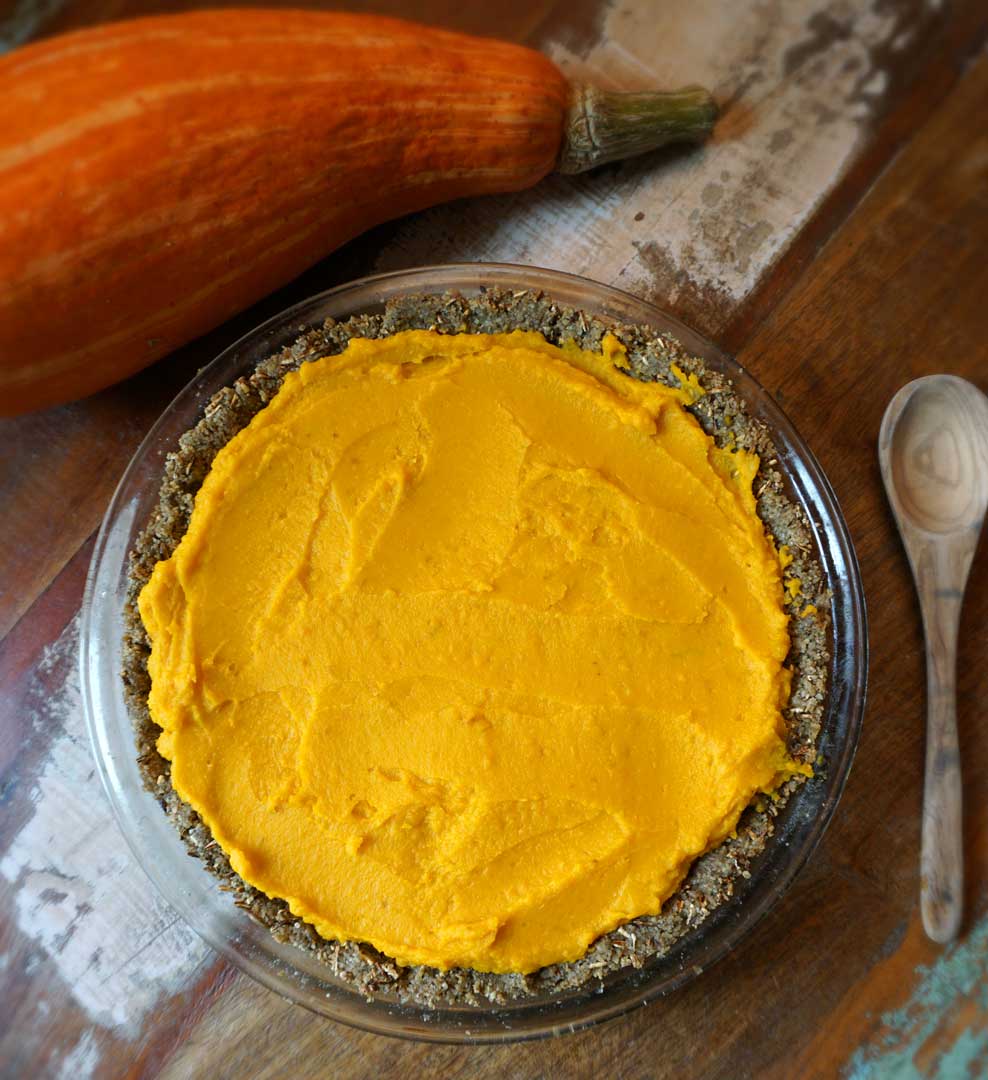 The pie filling is delicious and will challenge your self control to not eat it all before it goes into the oven.Photo by Jonathan Thunder

Both the original and the re-created pies are gluten free, dairy free, and vegan. The traditional diet of the Anishinaabeg isn’t built on dairy and wheat, and Chef Ed and I had originally decided we wanted to prepare a feast that was brimming with as many traditional flavors as possible, so it just kind of turned out that way.

The crust is a mixture of shelled pumpkin and sunflower seeds blended with a bit of homemade wild rice flour, maple syrup, some wonderful sea salt I was gifted from a friend who gathered it himself during his family’s yearly North Shore salt harvest every year on Oahu, and just a splash of water and oil. It’s a crust that I developed in 2016 when I was working in the Sioux Chef kitchen in Minneapolis, with the help of my friend and mentor Sean Sherman and his sunflower cookie recipe that I was tasked with helping to perfect during my year in the kitchen with him.

Last October in Oahu, wild ferns were in season and so were locally harvested just before our collaborative dinner. This time around, trying to utilize all local flavors in October in Minnesota means all of my fern gathering has come and gone and my fern friends have been in and out of the dehydrator for some months now. For this recipe, I had to figure out a way to rehydrate the fiddleheads with as much flavor as possible. 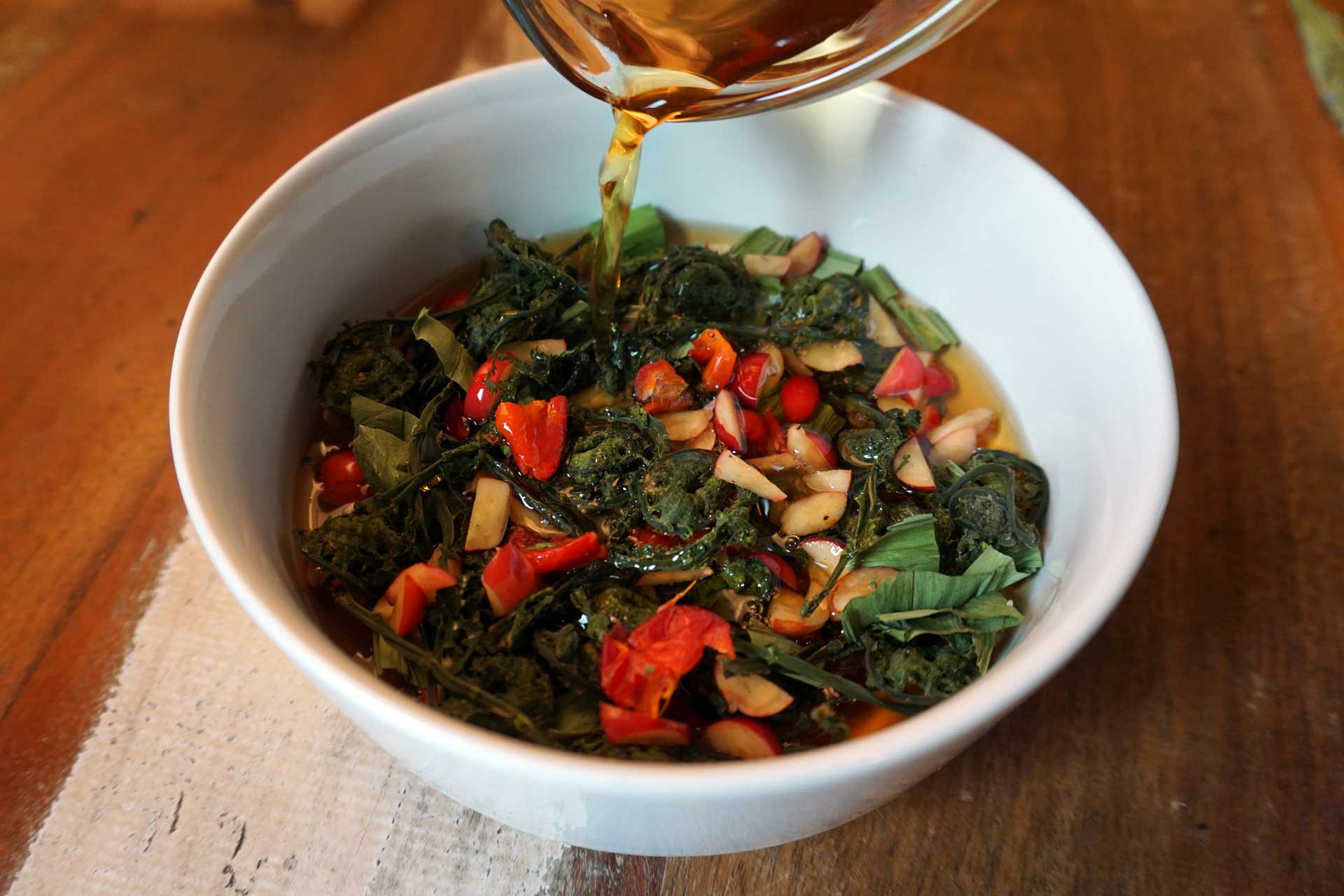 This rehydrating salad is pleasing to the eyePhoto by Jonathan Thunder

I decided to go foraging for sumac berries, as they were nice and red just when I needed them to be. When I got home, I packed the berries into a glass jar and filled it with water and left it to soak overnight. I new that in the morning I would have a citrusy liquid I could add a little maple syrup and salt to and rehydrate my fiddleheads with. To this I added some chopped and dehydrated wild leek greens I had gathered the same time as the fiddleheads, in late spring earlier this year. I was thinking this would cover the onion and citrus of the original recipe. I threw some crabapple into the mix for good measure and crunch.

The pie turned out delicious. The fiddleheads rehydrated into a nice, firm-ish texture with the freshness and citrus of the crabapple and sumac adding a locally-derived source of brightness to the dish while the leeks rounded it out with their own wild and savory, onion appeal. 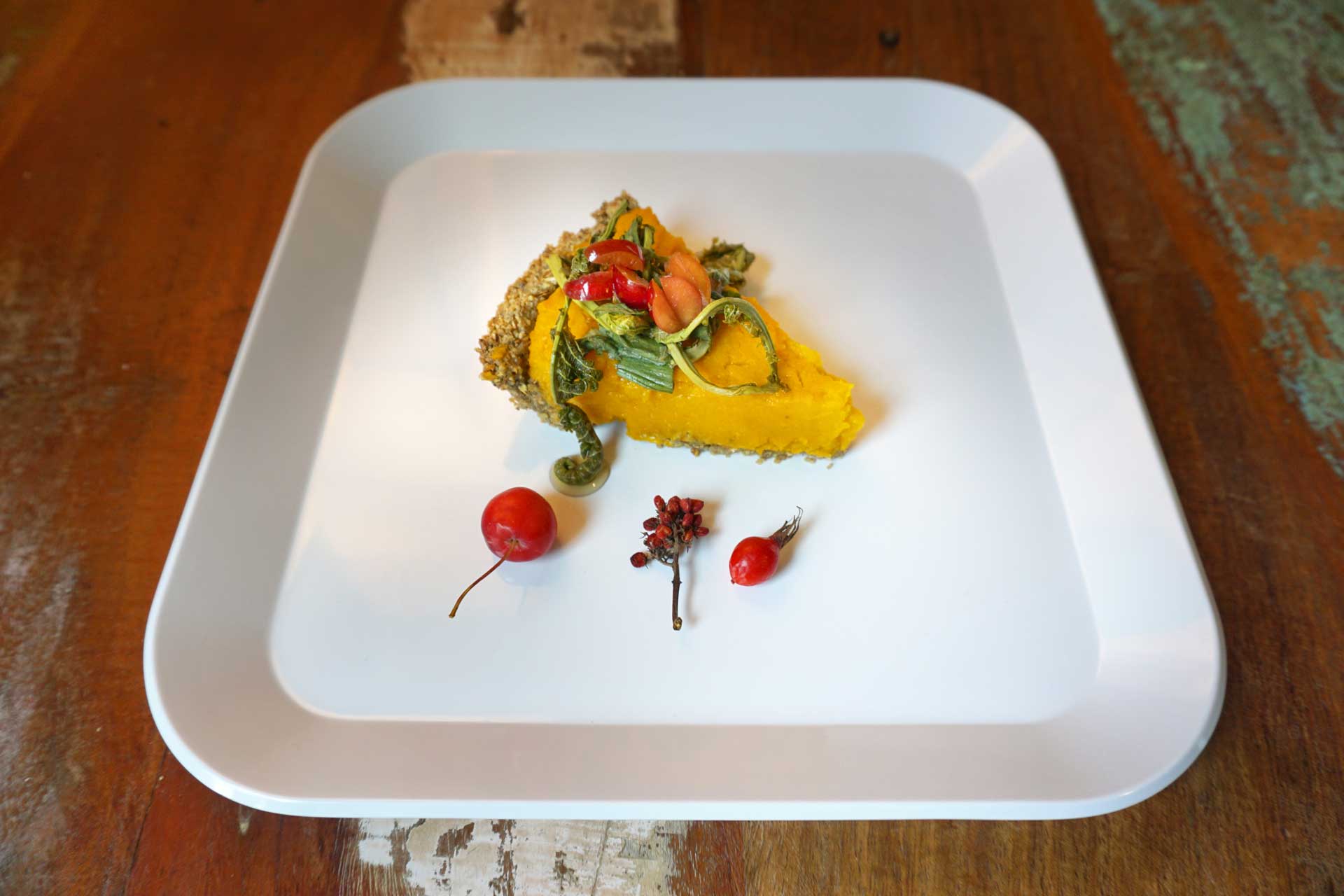 The pie has loads of interesting flavors from all across the seasons in Minnesota.Photo by Jonathan Thunder 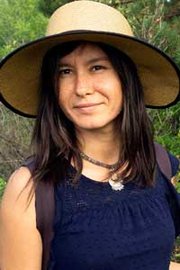 Tashia Hart is Anishinaabe from Red Lake, MN. She studies and teaches about wild foods in a variety of ways, is also a freelance writer, and makes birch bark and beaded jewelry. She has a biology degree from Bemidji State University, and has worked for the Red Lake Traditional Foods Program, as well as The Sioux Chef catering company, and is currently combining her loves of food, wilderness, and culture in a middle grade novel that has themes of food sovereignty, animal rights, and is set in the forests and waterways she grew up with. She currently lives in Duluth, MN with her husband, their two cats and a turtle.

Photos and essay produced by PBS member station KQED, in collaboration with PBS Food.​ See the full photo gallery from this essay and find more recipes at the PBS Food Native America collection.