'We are here. We are present.' Native DJs Defy Genre

Posted by Juan Plasencia on 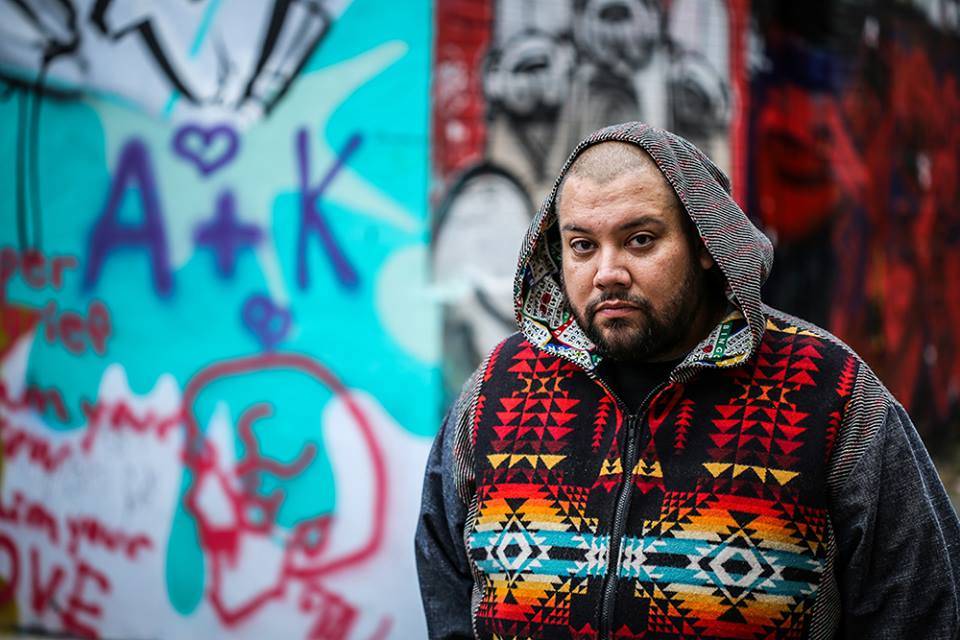 Editor's note: The opinions expressed in this blog post are solely those of the author. Some of the lyrics by the artists discussed in this article contain profanity.

Over the last 10 years, a new sound has emerged from American Indigenous communities, one equal parts fresh and familiar. Indigenous artists, producers, and DJs are incorporating traditional beats and instrumentation into genres like hip-hop and electronica, creating an entirely new hybrid genre. This new sound has united youth in Native American communities and beyond. We talked with fans and Indigenous artists Supaman, DJ Shub, and A Tribe Called Red (ATCR) to help us decipher this sound and give deeper insight into how it relates with traditional Indigenous culture. 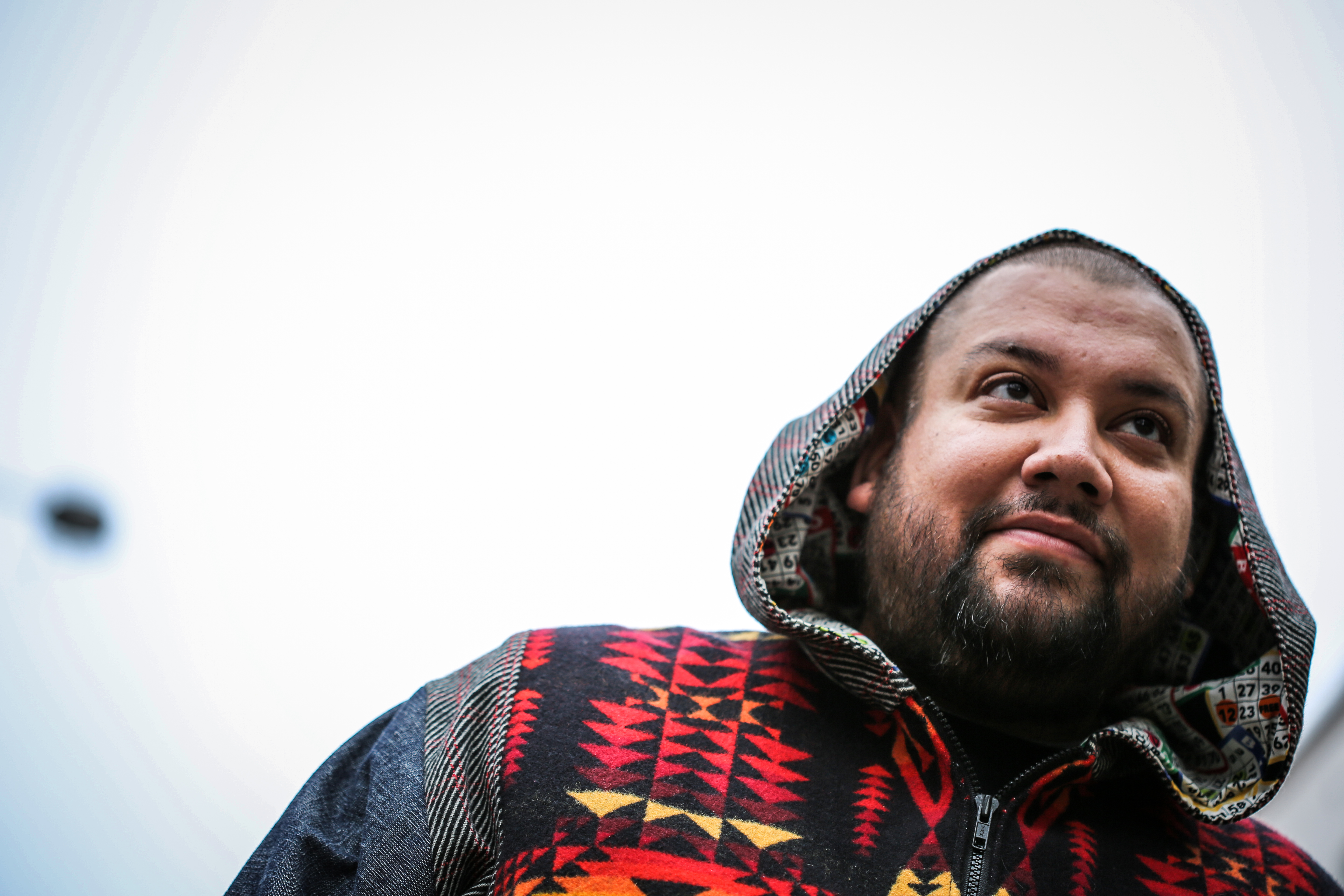 Throughout Native American history, music has been used to tell and retell a tribe’s story. DJ Shub, a Mohawk from Six Nations of the Grand River reservation in Canada, goes by the moniker “The Godfather of Powwow-Step.” He offers his take on the shifting nature of traditional music. “A lot of the time, we held on to our culture because it was stripped away from us. As a people, we were afraid to open up. Now that times have changed and things are going differently, it’s time to open up and let people see it.”

Bear Witness of A Tribe Called Red (ATCR) also grew up in Six Nations of the Grand River Reservation. He views this new generation of music as a “cultural continuance.” DJs and producers not only use the sounds of powwow music, but also its message. 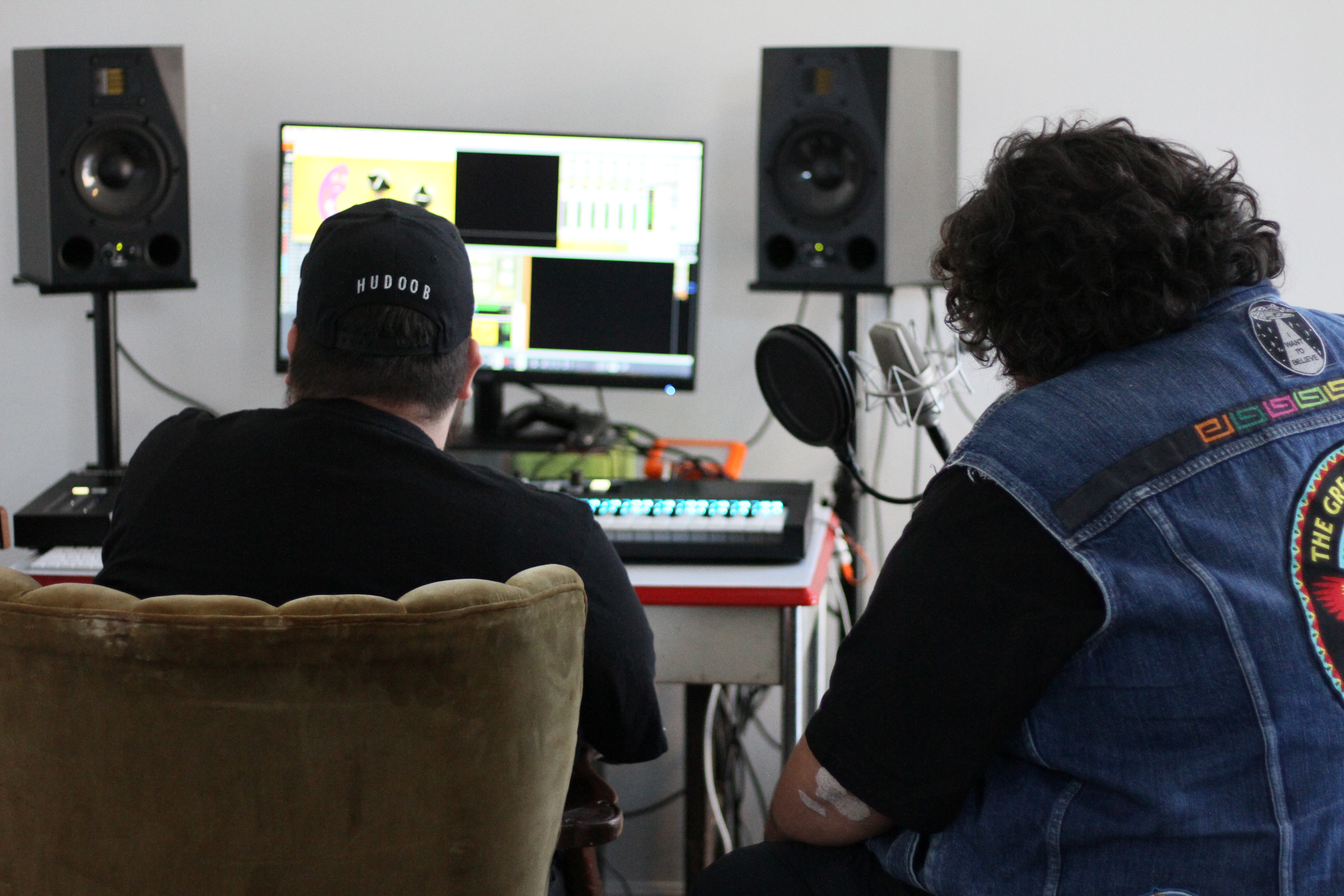 Tim “2oolman” Hill and Ehren “Bear Witness” Thomas work side by side in polishing up a new single.Photo by Juan Plasencia

“It started at a club night in Ottawa called The Electric Powwow. We ran it for over nine years,” recalls Bear Witness. “It was all Indigenous DJs and we advertised at the Native Students Association and at the Friendship Center and places we knew where Indigenous people would be.” 2oolman, also with A Tribe Called Red adds, “Now we find ourselves making our own songs, getting in the room, and creating with the drum groups. The music is hard to describe since we are always jumping genres.”

DJ Shub says now that his performances are landing a wider variety of venues, it’s creating a space for people to ask questions about Indigenous culture. He says that people outside of his community always ask him, “What’s that chanting music?” 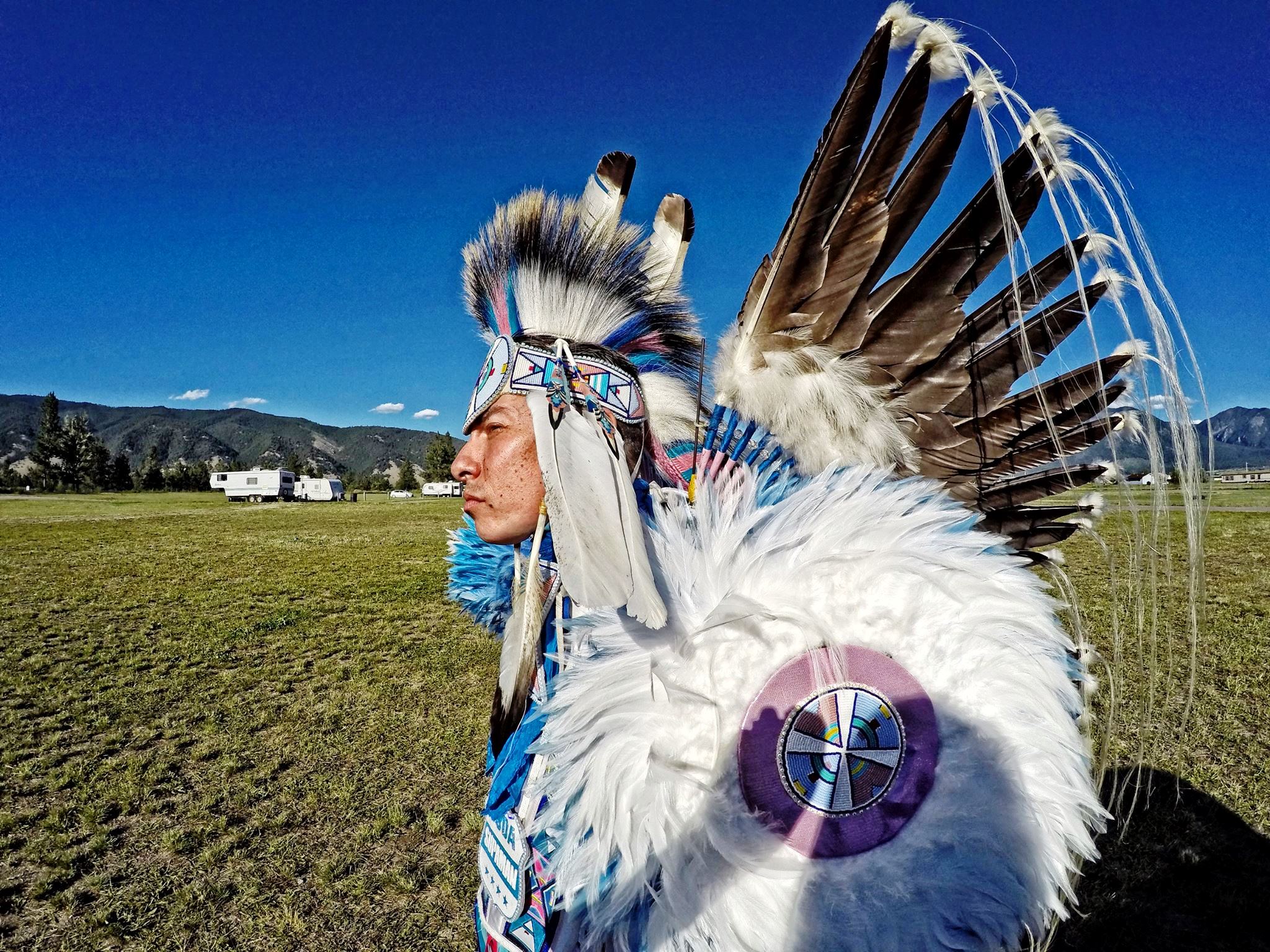 Christian ‘Takes the Gun’ Parrish, aka SupamanPhoto courtesy of Supaman

Supaman, an Apsaalooké from Crow Reservation in Montana, also incites curiosity in his non-Native American audience by wearing his fancy dance outfit on stage. Although it didn’t begin as an intentional choice — he ran out of time for an outfit change during an event — Supaman says, “It became really unique, something powerful at that moment.”

Kalorie Roanhorse, a Supaman fan from the Dene tribe, admires Supaman's hands-on approach to community. “I’m really proud of him and the things he does. He comes by and shows the kids and talks about everything. He’s really out there and everybody knows him. Even my son, he’s running around at the playground and he’s like, ‘Supaman’s coming! Supaman’s coming!’”

As one can imagine, this sensitive melding of contemporary music with traditional culture walks a fine line. Using sacred chants or songs in new generational music is taboo. For this reason, Supaman maintains boundaries between his culture and hip-hop. He never combined them early on because, in his words, “You just don’t do that!” According to Supa, Native American elders opposed culture from being manipulated or expressed in this way.

However, as an increasing number of Native American performers are taking their music to a larger non-Native audience, the elders within the community are re-evaluating and making amends with the younger generation’s interpretation. Their concern is in protecting their heritage by discouraging artists from exploiting the culture without permission or representing it in a negative manner. This goes for both Indigenous and non-Indigenous artists alike. But an increasing number of people maintain that traditional culture can actually grow stronger with new interpretations. As Roanhorse notes, “It may be a different style, but they are still carrying on the traditions and the songs and our way. People are listening more. They are really interested in it now.” 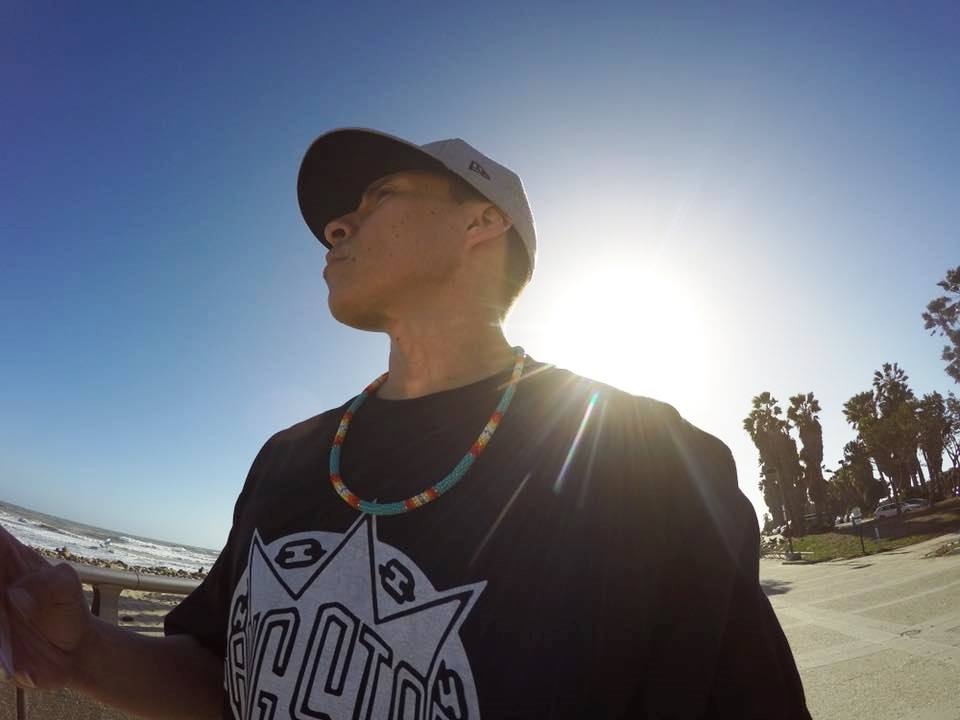 DJ Shub chimes in, “It’s such a beautiful culture, and why not show the world? [Music puts] the culture on another platform where people can see it. On a world platform.”

Still, not everyone embraces this new music trend. As an Indigenous man who grew up on the rez, Supaman still faces opposition when intertwining Indigenous culture with hip hop in his music. “There are still people who are like, “You shouldn’t do that, that’s not right.’” But he believes in exploring boundaries and incorporating self-expression into art and music. “Not only does it present itself as ‘This is who I am,’ but it encourages the young people.”

DJ Shub has also faced opposition from elders regarding his appearances at venues outside of the Native American community. In this case, the elders aren’t objecting to the music but rather that alcohol is served at these venues. According to DJ Shub, traditional music and alcohol “absolutely should never be mixed together like that.” Apart from this, his elders express love for his music and his efforts to bring his culture forward.

When ATCR was asked if they think they are changing the game with this new genre of music, 2oolman had this to say, “I don’t know if it’s changing the game, but we are definitely growing with it.” They see this journey as a learning experience, and as the days go by, show after show, they continue to learn. However, others feel that they are shifting the tides for the better.

"It’s such a beautiful culture, and why not show the world?"

Music fan Lisa Young, an Eastern Band Cherokee and Jicarilla Apache, welcomes the representation. “It’s nice to see Natives in what’s considered mainstream. People don’t understand what it’s like to never see someone like you in mainstream anything. So that’s just a huge honor. It’s neat and you don’t realize it until it happens. You’re like, ‘wow that’s big!’”

Works from modern Native artists not only offer people a path to reconnect with tradition, culture, and America’s true origin, it also alerts the outside world that Native American culture and community is still active today.

“I feel like a lot of people think of Indigenous people as a past,” Joey Montoya of the Lipan Apache Band of Texas and founder of Urban Native Era tells us. “Even when going to gatherings and people see us in regalia, or what we wear, people always think of the past. But with A Tribe Called Red and Supaman, they are allowing folks to see a more contemporary side. We’ve always been here, but now it’s nice to see that through music, through dance, and through other forms of culture.”

As Supaman states, “America always forgets about the Natives.” This new generation of hybrid music artists seeks to correct that. Says DJ Shub, “People don’t realize that we are here, we are present, and we are doing our thing now. We are relevant now. We’re lawyers, we’re doctors, and we’re musicians.”